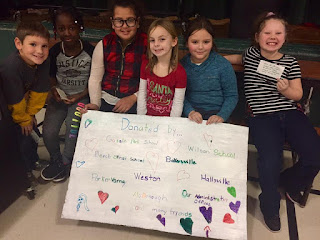 When students and staff at Gossler Park Elementary School heard that an apartment fire affected some of the school district’s Bhutanese families, they wanted to help. The fire on Spruce Street in Manchester back in August forced about 20 people from their homes in the building, and they lost nearly everything. Most of the people who lived there are refugees from Bhutan, a country in South Asia.

The effort to help victims of the fire started with a class of second graders, who offered to save their popcorn money to donate. Then the Gossler Park parent-teacher group which sells the popcorn as a school fundraiser decided to donate two weeks’ worth of sales. The school also accepted contributions from parents who attended Gossler Park’s Harvest Fest this fall. 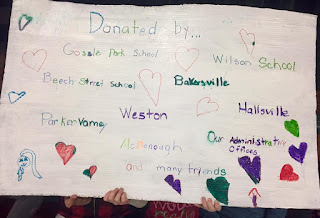 Word spread throughout the school district, and additional schools stepped up to make donations to the cause through their own fundraisers. Among them are Bakersville, Hallsville, Wilson, Parker-Varney, Weston, and McDonough elementary schools, as well as the school district central office.  Gossler Park students collected all the money and presented the total -- $1,722! -- to leaders of the local Bhutanese community at a school assembly.

Popular posts from this blog

By Unknown March 04, 2019
Kindergarten and New First Grade Registration Dates Announced Manchester’s elementary schools will be accepting registrations for kindergarten and new first grade students in April.  Students currently attending MSD’s pre-school programs do not have to register for kindergarten at their neighborhood school ; those records will be transferred.  Not sure which is your neighborhood school?  Find it HERE . The dates and times for children and parents to register in person at each school are listed on the   Manchester School District Website . Please note that one evening date and time has been scheduled, and students across the city can register there, regardless of their home school. Teachers will be on hand during daytime hours to give your child a literacy screening, which is a simple tool that asks your child to complete some kindergarten and first grade level tasks.  No appointment is necessary.  The required forms are available for download .  Filling them out befo
Post a Comment
Read more